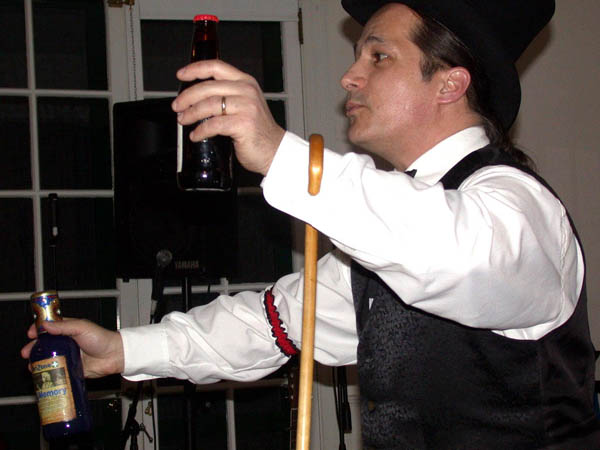 At the Blue Hill Fair in September 2004, Dr. Wilson's Incredible Sideshow first exhibited the Feejee Mermaid, a natural wonder first displayed in America by legendary showman P.T. Barnum in 1842. The mermaid is one of a few remaining specimens of this remarkable discovery, first brought to the West by travelers to the South Pacific early in the nineteenth century.

P.T. Barnum acquired the Feejee Mermaid from a Dr. Griffin of the Lyceum of Natural History in London, who described it as nothing less than a veritable mermaid taken among the Feejee Islands (now Fiji) and preserved in China. Dr. Griffin had bought it for $6,000, a fortune in the early nineteenth century. Barnum exhibited the mermaid at his American Museum in New York. The mermaid became one of Barnum's biggest attractions during his first year of business.

The preserved specimen generated a storm of controversy, which only caused more people to seek it out. Famous naturalists of the day disagreed about the authenticity of the specimen. Not content to denounce the mermaid alone, a Southern cleryman also railed against the authenticity of a stuffed duck-billed platypus, a creature familiar to most children of today from zoo visits and nature shows.

It is difficult to establish whether the specimen acquired by Dr. Wilson, or the one at the Peabody Museum at Harvard, are actually the ones displayed by P.T. Barnum or his colleague Moses Kimball. Barnum and Kimball traded objects from their collections frequently. Barnum's museum and most of its contents were destroyed by fire in 1865, but it is not clear whether the mermaid was in the museum at the time.

Dr. Wilson acquired the Feejee Mermaid through a fantastic stroke of luck. His specimen had been in storage since 1957, part of a large collection of curiosities displayed at a tourist attraction in Sarasota, Florida. The museum was started by the late Robert Moseley, a man who refused to put a nickel into the stock market, a characteristic that had left him rich following the stock market crash of 1929. Robert Mosely used his money to buy up a wide collection of circus and sideshow memorabilia, including many Barnum artifacts. He used this collection to start his sideshow museum. Changing public tastes and the booming tourist industry in Orlando caused the small museum of curiosities to undergo a slow decline; it finally failed in 1957. John Moseley, the son of the former owner, held on to the entire collection until his death in October, 2002. His family had no interest in the collection of curiosities, which included the familiar stuffed alligators playing miniature guitars, jackalopes, and similar items. Dr. Wilson heard of the collection while visiting relatives in Florida.

Among the trash was this treasure. Dr. Wilson was first attracted by the box, a very old and solid packing crate marked "Philadelphia Museum." There was a Philadelphia Museum operated by Charles Willson Peale and his son Rembrandt Peale from 1821 to 1848. P.T. Barnum and Moses Kimball bought the entire collection, and divided it between them.

Upon seeing the crate, and recalling the history of P.T. Barnum and the Philadelphia Museum, Dr. Wilson persuaded the Moseley family to open it, revealing the Feejee Mermaid. Hardly able to conceal his excitement, he purchased it on the spot for a generous sum. 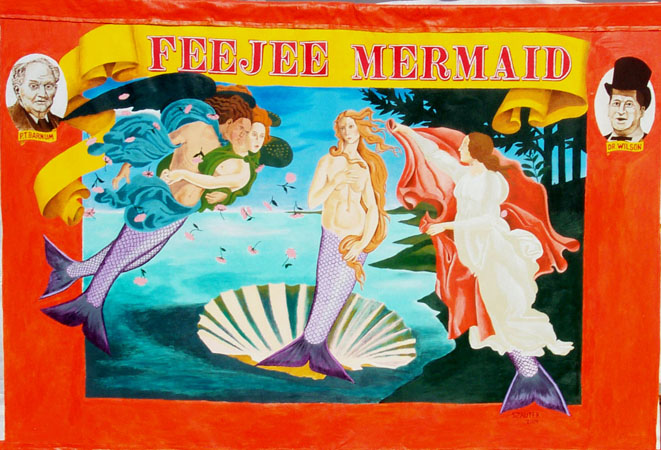 The Feejee Mermaid was exhibited at Wilson and Dark's Traveling Carnival and Theater of Marvels at the Town Hill VIS Hall on October 29, 2005. Hear Dr. Wilson interviewed on WERU, where he unveils the Feejee Mermaid to his shocked hosts!

See more on this great piece of American History at these links: